Most people immediately envision a blue color panel whenever they hear the word ‘solar’ because most offers are blue.

But have you wondered why almost every other solar you come across has a blue tinge to its overall appeal?

Solar panels are blue because they are made from polycrystalline, a type of silicon, and that’s why they are also referred to as the polycrystalline solar panels. The blue color also results from the anti-reflective coating used to help improve the solar panels’ absorbing efficiency and capacity.

Interestingly, solar panels can come in different cooler colors, including black, which absorb the most heat.

In this article, we will investigate a bit further the main reasons why solar panels are blue and we will also try to understand if blue solar panels are special in any way or if it´s a standard requirement for all manufacturers.

Without any further due, let´s get right into this!

Top 2 Main Reasons Of Why Solar Panels Are Blue

#1 Because Of The Material Used

If you are wondering what gives most solar panels the blue hue, it comes from the polycrystalline or multi-crystalline cells used to make the panels.

Silicon, which is the eighth-most abundant material in the universe, is also the building block for panels. It is used in a myriad of other industries, including glass, electronic elements, and cement, among others.

The first photovoltaic cells and first solar panels used silver, chloride, and selenium. However, silicone became an efficient alternative and has since become the primary building block for panels used in solar systems.

Silicon is rare in its pure form, but the forms used in solar panels retail the blue tinge of pure Silicon.

It also has a metallic grayish luster that is often hinted behind the blue hue you see in most panels.

Polycrystalline forms have a blue hue, while mono-crystalline silicon has a robust black tinge. This is why panels come in either blue or black colors.

Most are blue because manufacturers prefer to use polycrystalline and multi-crystalline forms of silicone, which have a blue hue.

#2 Because Of The Reflective Coating

As the name suggests, an anti-reflective coating is added atop the solar panels to reduce reflection.

Apparently, without this coating, most of the light that reaches a solar panel would be reflected in the atmosphere, resulting in massive energy loss.

The anti-reflective coating is designed to allow maximum light into the panels and block reflections, resulting in minimum energy loss. They can drastically improve the efficiency of panels and come in different materials.

Almost all anti-reflective coatings will change the way light interacts with the solar panel.

The effect also tends to make the panels appear more bluish. Most AR coating used in treating polycrystalline solar panels will, in some way, augment the blue hue, especially on a sunny day when the sky is clear.

If silicone remains the building material, blue and black are the two colors you can get for solar panels.

Both options will get the work done, but feature key differences.

Black panels are seen as pure and very efficient, as they can absorb most of the light.

Blue panels, on the other hand, are cheaper to produce and also provide sufficient energy. However, they feature numerous silicon cells side by side. This reduces the path for photons to travel, which makes them less efficient compared to black panels.

About 90% of all solar panels provided for commercial and residential use feature polycrystalline silicon cells, which are easier and cheaper to the manufacturer.

The cost to produce the solar panels is a crucial factor for manufacturers, considering blue panels ultimately get the job done.

Some solar panels are black and offer higher absorption capacities, so your choice will depend on what you need.

Black panels will tend to be more expensive since they provide more energy compared to blue panels. Although, various other factors determine solar panel efficiency.

Solar panels are available in many colors, thanks to technology advancements that allow different ways of adding color to the panels.

From green nanotube patterns to the full range of hues available with pixelated printed patterns, you can choose panels on the merit of their aesthetics and colors.

So why are solar panels blue? The straightforward answer is because they are cheaper to manufacture. It is expected that colors may shift to black as more buyers seek higher efficiency.

Nonetheless, most panels you will find today are blue. If you want black or other colors, you must find manufacturers that provide black panels or make a custom order.

Did this ever cross your mind “why solar lights are blue”? Or did you assume they are supposed to be blue?

We would love to hear your comments around this topic. 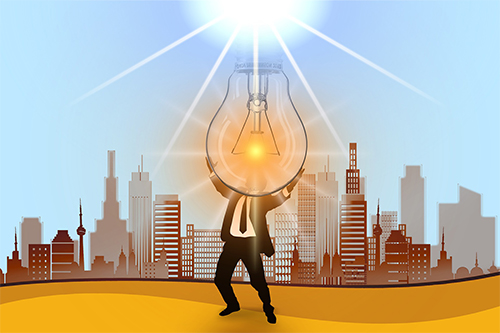